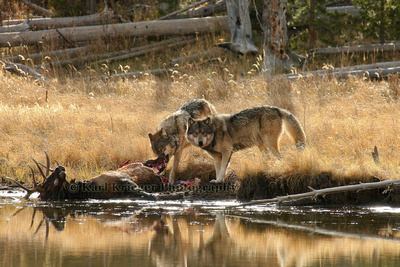 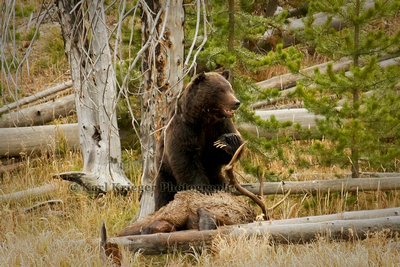 This isn't really day one... my photographic adventure started when I was a kid, always messing with a Kodak 110 camera I got for Christmas one year.  The fascination grew in the early 1980's as I took a photography course in College, then progressed through the years with a variety of film cameras as I shot images of my hometown, family, muscle cars and street rods, drag racing, and finally - the fabulous landscapes of Montana.  The cameras took a back seat for a while after I got married, started a family, built several houses, and started a career in the health insurance industry.  In 2008 I was intrigued by changes impacting the photography industry.  After doing some research, I decided to move into the future and purchased my first digital camera, a Canon 40D.  The 40D was soon joined by a Manfrotto tripod, Canon 100-400mm lens, and a Canon 70-200mm f2.8 lens.  I played with my new toys for a couple of months, then took a weekend trip to Yellowstone with my family in October.  There, I started to learn some of the advantages (and disadvantages) of the digital camera.  One crisp Autumn morning, I took hundreds of images of a bull elk along the Madison River.  He was tired from the recently ended rut and was an easy subject to photograph.  With my old film cameras, I would have been pushing it to take a couple dozen images.  With digital, however, several hundred images were easy and even more important - cheap!  By the time I returned home and sorted through all of the images of the bull, I found there were only a couple dozen I really felt were worthy of keeping.  The rest were mostly duplicates of the ones I liked.  Lesson learned.

As I headed home with my family at the end of the weekend, we traveled North from Old Faithful toward Mammoth and came upon a traffic jam near the Twin Lakes area.  A bull elk was down on the far side of North Twin Lake, a victim of a wolf kill earlier that day.  We set up with a small group of people on the near side of the lake, hoping the wolves would return after taking a brief rest.  Soon, members of the Canyon Pack began to return to the kill - including the pack's lone surviving wolf pup of the year.  As we shot into a brutal sun behind the scene on the other side of the lake, drivers on the road started to warn of a grizzly that was moving along the road and headed our way.  Those of us with bear spray checked to make sure it was ready in the event the bear showed up and continued to photograph the wolf activity on the other side of the lake.

Suddenly, the bear showed itself... thankfully on the far side of the lake, on the end opposite the wolves.  As the bear galloped toward the kill, all but one of the wolves scattered into the nearby trees.  The remaining wolf circled the bear and ran parallel to him as he approached the elk.  To make a long story short, the bear took the elk from the wolves, showing it's massive strength as it pulled the elk out of the water and drug it back into the trees.  From there, the bear stayed with his dinner - fending off all attempts by the wolves (and ravens) to get close to the elk again.  As the sun dipped below the mountain tops, we headed for home, knowing we'd experienced an event few people would ever have the chance to witness... and hoping that I knew enough about my new camera system that our experience would be documented forever.